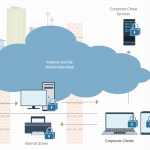 …Google says. Or they don’t actually say so, but their BeyondCorp approach to enterprise security certainly address it. Instead of building a perimeter sound enterprise network, they push security to whom shall access what without building a wall around it. I have tried to split this graphically in four as follows:

Thanks to Creately for diagrams.