Me obviously being an Android fan, I just wanted to comment on the new iPhones 5C and 5S.

5C is to my opinion overpriced and has the look of iPhone 3GS (especially in white). Yes I know there is more inside, but enough said about 5C…

Now the new 5S. However not revolutionary new by design, one thing caught my security minds attention – TouchID. Seems like it is now time for consumer electronics to use biometric features for authenticating users. Creds to Apple for doing this. Android tried this a couple of years ago with the face recognition (front camera) feature. This was not very secure, so lets hope Apples TouchID is better and leaves less false acceptance rates (FAR). At the glance of it, there are at least three things making me positive:

Just one final comment to the TouchID, looking at the following picture.

How the heck can the reader authenticate you in a practically acceptable way (performance wise, without having to touch n-times) while holding the phone with one hand? 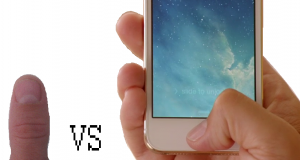