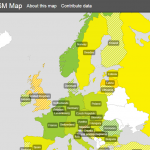 Fake base stations have been identified around government buildings in Oslo, Norway (according to Aftenposten). According to GSM Security Map, which compares the protection capabilities of mobile networks, Norway is ranked above with regards to the adaption of protection mechanisms to GSM networks. Does not seem “above” is enough to withstand fake base stations, unfortunately.

However, the use of fake base stations, even in Oslo, should not be a surprise. In November US marshalls were deploying fake cell towers on airplanes.